Posted by Anonymous at 7:56 PM No comments:

First introduction to ‘O ‘ (not to be confused with this ‘Oh’) – a dude that under his aka T.R.A.C.K.S. has been a crucial part of two highly respected groups – IRS & Big Black Lincoln (BBL) – that gave us two of the city’s most critically acclaimed albums: “Welcome to Planet IRS” & “Heaven’s Caught On Fire” respectively.

“T.R.A.C.K.S. Lament”  gave us our first taste of the kid as a singer; “Clementine”  – his duet with Andreena Mill – became one of many classic cuts off the BBL project; and his production/vocals on “Things Change”  made it a stand out single in Mayhem Morearty’s catalouge. Last time we heard him was about a year ago when he relinked with IRS to drop vocals on “Rock For You”  featuring Promise; and produce “No Regrets”  featuring Frankie Payne, Kardi and Kim Davis; all off TRF’s solid “The New North” album.

“Yesterday’s Tomorrow” is a collection of cuts he put together a couple years back but is officially releasing now. So in that sense, it’s a taste of where he’s been musically and kinda serves as a precursor for what to expect moving forward from this super humble and talented Toronto artist.

Posted by Anonymous at 8:59 PM No comments:

Posted by Anonymous at 8:41 PM No comments:

Moka Only is one of Canada's most celebrated hip-hop exports, a former member of Canadian rap royalty Swollen Members who has released dozens of solo projects since he broke through in the mid-90s. Ayatollah is one of the most respected producers in the American underground hip-hop scene, having crafted classics like Mos Def's "Ms. Fat Booty" and Talib Kweli's "The Proud," plus tracks for Styles P, Pharoahe Monch, Masta Ace, Cormega, Inspectah Deck, and many more. Now, these two talents have come together for a full-length collaboration straight out of hip-hop dreamland. All rhymes by Moka Only (as his alter-ego Ron Contour) and all beats by Ayatollah.

Posted by Anonymous at 7:49 PM No comments:

"Officer Down" The second single off Brotha J's Hip Hop Soul Project Entitled "You Already Know Me" set for release this year.
Posted by Anonymous at 6:55 PM No comments: 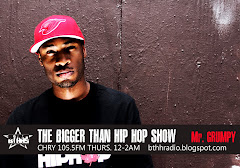